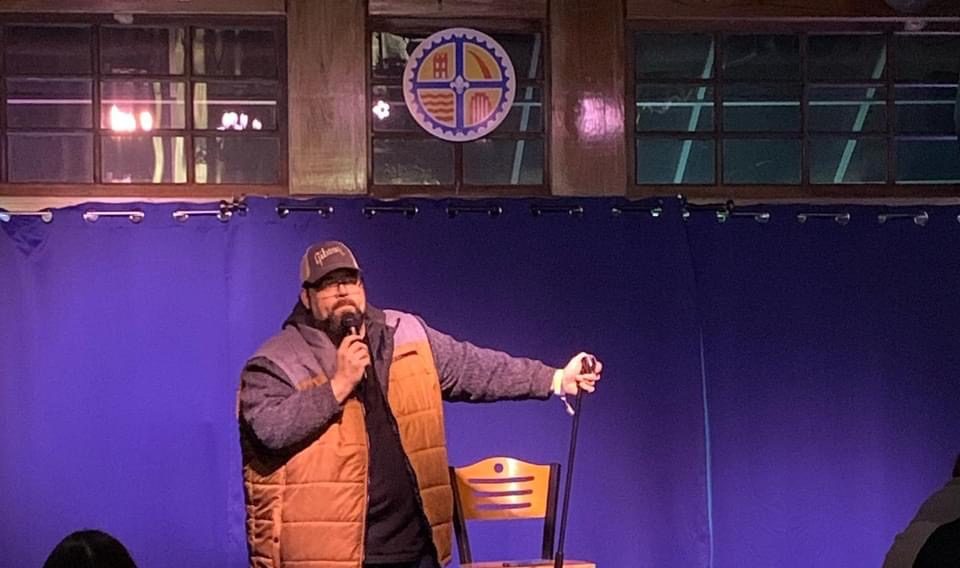 This spring, I’m recording an hour of comedy. So, I’m working on that hour a little bit every time I’m on stage. The goal is to have a fully formed outline for the material by the end of this month.

A few years back, I worked with Christopher Titus for a weekend, and he was just at the early stages of writing that year’s hour of material. Titus is one of my comedy favorites. His hours work as both stand-up, and a one man show you’d see in a theater. Watching him work the material that weekend, scripting out each line, cutting every word he could spare, and jumping on his laptop immediately after each set to note the crowd’s reaction to certain parts over others, was extremely helpful.

So obviously, I’m stealing his method.

The other thing I got out of that weekend was a lot of good advice about being myself onstage, and writing about what interests/motivates me.

“Don’t let what other people tell you a crowd wants determine the material you do. This is only funny if it’s really you.”

I like this material and it’s coming together nicely. It mostly centers on the fact that I am the product of two teenage parents, who each went on to have children with other partners, but never again with each other. My mom met my dad when I was one, married him, and went on to have two more sons. My biological father has six, I think, other children by different women. I’m each of their oldest child.

The phrase “oldest child” is a double entendre. When my mom introduces me as “my oldest child,” it’s a term of endearment. It shows the person she’s introducing me to who I am. It also shows them how much more she loves me than she loves either of my brothers.

But she’d also probably introduce me as “the oldest child I’ve ever seen” because of my tendency to type things like the previous paragraph. She wouldn’t be wrong.

← The Best is Over
Politics Are Already A Joke →

Sometimes the David Letterman philosophy of “Keep the bit going until it’s funny again” is hard to resist.

I can’t go back to economy. First class all the way.

It’s been a fun week of playing the baddest Santa ever at Dasher’s Dive Bar @ @powerplexstl. Go check them out the next couple of weeks while @brendanolsoncomedy fills the role with @cori_does_stuff as your host, Jackie Frost. I’ll be back at it 12/16!

My album, “Adult Child of Child Parents,” is available at the link in my bio.

My album, “Adult Child of Child Parents,” is out on Helium Records and available from multiple outlets!

The link is in the bio.

Just a reminder that my album drops (digitally) this Friday!

You can buy it now, or wait until you wake up from a tryptophan induced coma tomorrow at midnight and accidentally buy it on all three services. The choice is yours.

Link in the bio!

Another dope AF @impolitestl in the books. I can’t believe this show is 7 years old. 8 years old? I can’t remember. What is time? Buy my album! #stl #standupcomedy #nightlife #absinthe

Airline joke has just almost found its final form (the “take off and land” part is coming out I think).
This started as a throw away one-liner that I didn’t even mean to say on stage and has morphed into a pretty good A vs B vs C but. I’m not sure if I’ll keep it as a regular bit, or just pull it out on special occasions, but it’s been a fun writing exercise so far.

You can scroll through my reels to see the different iterations of this.

Now its time to find some coffee to help ward off the winter (late autumn) cool had with.

This is how I transform from all business to all fun!